COVID-19 is an infectious disease caused by a novel Corona Virus that emerged a few months ago and has now engulfed almost all the corners of the world. The virus is known to communicate from an infected person to a healthy person by the droplets of cough, sneeze, or breath of an infected person. With common cold/flu-like symptoms in the initial phase, some patients can develop acute respiratory problems as the virus damages the alveoli of lungs. This calls for the use of ventilators to help patients get sufficient oxygen supply and prevent further damage to other organs like kidneys.

Since there is no medication or vaccine available to cure COVID-19, ventilators and symptomatic treatment are the only options available with doctors for the treatment of critically ill patients. According to WHO, one in six cases of COVID-19 becomes critically ill and faces problems in breathing. 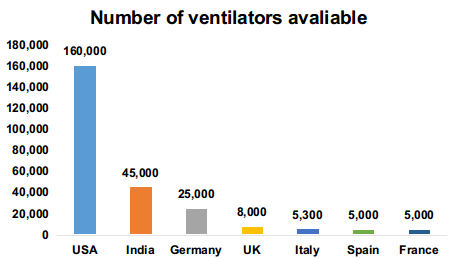 Although most of these countries have a decent ratio of ventilators to population, still, there is a daunting shortage of the devices as the demand has grown much fold. According to MIT, the US alone is falling short of 300,000 to 700,000 ventilators and has ordered around 100,000 ventilators from various manufacturers. Germany, even after having the best figures per unit population, has ordered 16,000 more ventilators. UK needs 30,000 more machines to mitigate the dire consequences of COVID-19. India has also ordered 10,000 from China. An estimated 880,000 to more than a million ventilators will be needed the world over to combat this virus outbreak.

Currently – according to a market research report by Meticulous – the biggest ventilator manufacturer in the world is Becton Dickinson, a US-based company, with a net worth of about $63bn, followed by Dutch firm Philips which is worth $30bn. Philips has said to increase its ventilator production to 2,000 units per week amid the COVID-19 crisis. Hamilton Medical is the third-largest ventilator manufacturer which is aiming to double its production by end of April. New Zealand- based Fisher & Paykel Healthcare stands at fourth place followed by German company Draeger. Headquartered in Ireland, Medtronic is currently the sixth largest producer of ventilators and actively operating in the US. It is working with Tesla to speed up production. The other prominent manufacturers include GE Healthcare (US), Smiths Group PLC (UK), ResMed Inc. (US), and Maquet Holding B.V. & Co. KG (Germany).

Ventilators as an Intellectual Property

“Ventilator” does seem to be a single entity and just a single kind of product but like various car manufacturers produce different models of cars with different technologies, the same holds true for ventilators.

A lot of research and development goes into their design, production, and assembly of the various components which assemble together to function as a ventilator. The companies get their designs patented and hold the right to produce and sell their products such that no other company or competitor can copy and manufacture their design without consent from the patent holder.

So, the number of patents filed by a company in a particular technology can give valuable insight into the hard work of that company in research and development.

Similarly, country-wise analysis of filed patents in technology can enable one to compare the innovation being done on the product by various nations. Recently, Medtronic has openly shared the design information of their ventilator model PB 560 in the hope to boost worldwide production of ventilators by other companies and countries.

The following graph shows top priority countries in the past 5 years in the field related to medical ventilators. 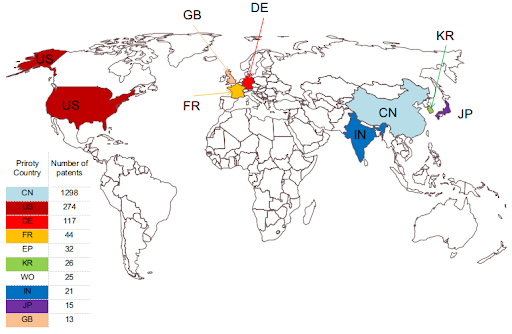 It can be seen that China has been far more active in R&D related to ventilators in the past five years than any other country. Around 1298 patent families are taking priority from a parent Chinese application as compared to a mere 274 from the US and 117 from Germany. In this COVID-19 crisis, when countries are banning exports of medical equipment to maintain stock for their own people, China is working round the clock to meet the dire shortage of ventilators globally. It has even donated 1,000 units to the New York state of the US which has been hit worst by the epidemic.

From the analysis of patent data, the various aspects of the technology can also find out. The latest developments in a particular part or sub-assembly of a product can be noted along with the information of inventors and assignees. The following figure depicts the number of patents filed in the last five years with respect to a particular domain or sub-domain of ventilator technology like noninvasive ventilator, flow sensors, airbag, air inlet, nasal obstruction, tracheal catheter, artificial respiration, respiratory therapy, etc. 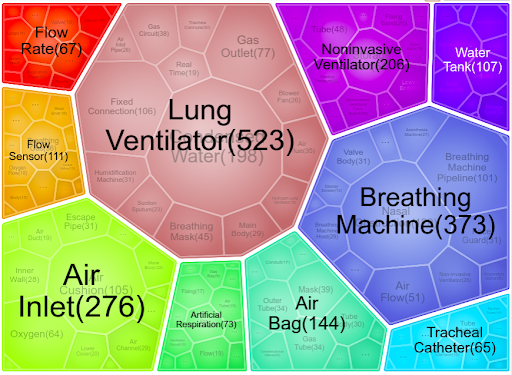 The number of patents/patent applications is truly an indicator of the innovation in any given technology field. Generally, it is important to know the companies which are filing the highest number of patent applications as it can act as precedence to the future growth of companies in a particular domain. The following graph shows the top assignees in the medical ventilator field from the past five years along with the number of published patents/patent applications belonging to each company. This data when juxtaposed with the financial rankings of the companies can be of utmost importance for someone who wants to enter this domain or invest in this field.

The following graph gives us an insight into the patent applications filed by the top ten assignees in the field of a medical ventilator in past five years. This data shows the recent trends in innovation by each company and helps in identifying the key innovators of the recent past. As can be seen, Koninklijke Philips is the topmost assignee with 146 patent publications since 2016, of which 67 applications were filed in 2018 alone. Air Liquide Medical Systems filed the maximum number of 46 patents in 2019 which is a sharp rise from its 15 applications in 2018. One caveat for the data from the Q4 2018, the Year 2019, and Q1 2020 is that patent applications usually take the time of 18 months for the publication, and therefore, the dataset for the above mentioned time window is partial. 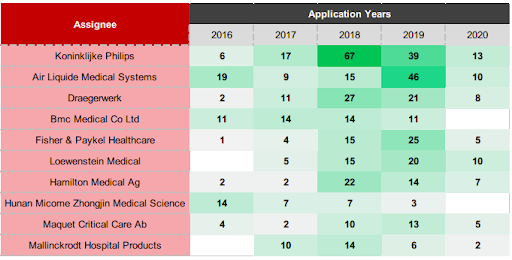 The following graph can be useful to identify the countries in which the top companies are having either their manufacturing facilities or their markets. For instance, out of patents filed by Philips the maximum applications have been filed in Europe followed by the US. Similarly, Air Liquide Medical Systems seems to have its manufacturing located in Europe, majorly in France while BMC Medical Co Ltd has its major research base in China. Draegerwerk appears to be the most prominent manufacturer and supplier for Germany. 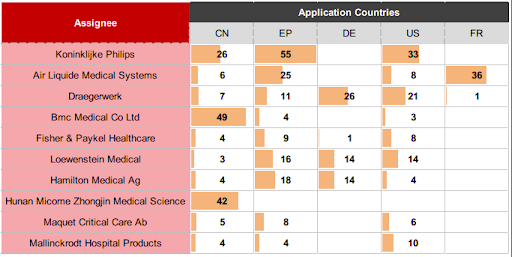 It can be seen that the analysis of patent data related to a particular field of technology can give a valuable insight into various aspects of the field and can be fruitful for someone who’s looking to delve into the domain, especially new companies which want to enter into a new technological domain. Tools like XLPAT provides a platform for regularly tracking big patent portfolios

The governments of various countries, owing to limited capacities of ventilator manufacturers, have asked their carmakers to come forward and produce ventilators. The US has given green signal to Ford, Tesla and General Motors after reducing barriers in the medical device approval process. Ford is now working with GE Healthcare to design and produce ventilators that can be manufactured using the parts typically used for cars like fans, batteries, etc. In the UK, ventilator blueprints have been delivered to more than 60 military engineering companies and car manufacturers, including Rolls-Royce, Airbus, Jaguar Land Rover and Unipart. Volkswagen is willing to use 3-D printing technology to produce essential equipment in case it is asked to do so. In Italy, Ferrari and Fiat are joining hands with the ventilator manufacturers to ramp up the production. Indian auto giants like Maruti Suzuki, Mahindra & Mahindra and Tata have geared up to manufacture ventilators and help India assimilate the impact of COVID-19.

Apart from manufacturing the ventilators at a high pace, many companies and research institutes are trying to come up with cheap and affordable replacements for ventilators which are generally high-cost equipment costing anywhere from 10,000$ to 50,000$. MIT has developed a low cost alternative called ‘Spiro Wave’ after one month of research & development and the product has got clearance from the FDA and is into production. Mahindra & Mahindra, an Indian company is also designing its low cost ventilator by automating the compression of ‘Ambu bag’ which was earlier pressed my hands to aid respiration of patients where ventilators were not available. A research team from the University of Barcelona, Spain, has designed, built, and carried out the tests for the ventilator using a small high-pressure turbine, two pressure transducer and a monitor with a digital screen. The components used for this costed just about 75$. Indian manufacturer AgVa has designed a 3.4 Kg, toaster-size, portable ventilator and its production has shot up to 20,000 units per month. An Italian company has used a 3-D printed adapter to convert snorkeling mask into a ventilator. In an Indian hospital, doctors have used a ventilator splitter to put eight patients on a single device.

The role of technology and innovation in combating any epidemic or disaster has become more apparent in this testing time of the COVID-19 crisis. Without ventilators, masks, sanitizers, medications, and hospital facilities, humanity would have already surrendered to this virus, and chances of resurgence would have been bleak.
The hard work and intellect of innovators that go into producing technology are protected by ‘Intellectual Property Rights’. XLPAT assists innovators to check the novelty of an idea through its novelty checker module powered by Artificial Intelligence (AI), Machine Learning (ML) and Web Scraping algorithms in a matter of minutes.
An analysis of the patents published in a particular technological domain can give an insight into the latest advancements in that technology and top companies and countries putting research efforts into that domain. This data can be of importance for new investors looking to delve into that domain and new innovators can also find current trends in R&D and bring their research to those levels. At the same time, new innovation, quick hacks to solve problems, out of the box solutions and utilization of available infrastructure from various industries to produce ventilators has intrigued the think tanks and pushed various researchers, institutes, start-ups and companies to go an extra mile in combating covid-19.