WHO has declared the world health crisis!!! People around the world have been locked down in their homes. Considering the current situation, one thing which we can be sure of, is that neither this situation is the first nor the last. We are not sure how many pandemics are due in the future. Apart from global economy, one thing which is suffering the most is the health sector. Although, governments have relaxed the norms for drug stores and hospital business, it is difficult and scary at the same time, to get a medical checkup with health professionals at their clinics or hospital because there looms a possible chance of catching the viral infection at these places. In this era of digital age, even the idea of the availability of health care professional at every doorstep is amazing!!!

The digital health care, also known as telemedicine dates back to 1960s when first incidence of real time telemedicine was used by University of Nabraska for sending out neuro-images to the doctors for online consultation. Since then, many established and startup companies have washed their feet in the field and its the result of constant research and development that currently, there are more than 100 applications online making the life of patients and doctors easy. Mostly, telemedicine majors in the areas of tele-radiology, tele-psychiatry, tele-dermatology, tele-ophthalmology, tele-nephrology, tele-oncology, tele-pathology and tele-rehabilitation. According to a market research report published on Aug 9, 2019 by Statista, telemedicine market is expected to grow significantly by 2021 with a CAGR of 14% with a market value of 41 billion U.S. Dollars only in US. According to a market research report “Global Telemedicine Market Outlook 2022” published on Jan, 2020 by research and markets, the market for telemedicine was valued at US$ 29.6 Billion in 2017 and is anticipated to grow at a CAGR of approximately 19% during 2017-2022 specifically in Asia pacific.

Considering the value of the telemedicine, number of patent applications filed have seen a constant growth starting from 1980. The number of patent filings have been seen to be spiked during the pandemics. One such incidence is the sharp increase after 1995 (Time near infamous influenza pandemic of 1998). Similarly, such steep increase was again observed during 2006-2009 (>500 Filings) and 2011-2014 (>500 Filings).

With every further step, this technology has evolved remarkably over the years. Telemedicine has spread its wings to cover various domains like Diagnosis; surgery; identification, Data processing systems or methods; Transmission of digital information, e.g. telegraphic communication; Healthcare Informatics; Electric digital data processing etc. Further, technological segregation over the years displayed the shift of telemedicine from a simple connectivity of doctor and patient via vedio-conferencing/chat/call to a more complex integration of assistive and predictive implementation of AI/ML technologies.

Certain Indian startups such as jiyyo (Chandigarh), curecompanion (Gujarat and Rajasthan) and Cardiotrack Telemedicine have been implementing AI technologies in providing an aid to the doctors for improved understanding and prescription.

Further, companies such as CMI Health, Vsee, Jiyyo has been providing a telemedicine kit comprising instruments such as stethoscope, sphygmomanometer, and others to be delivered to an individual in a kit for continuous monitoring and sharing with a health care professional. 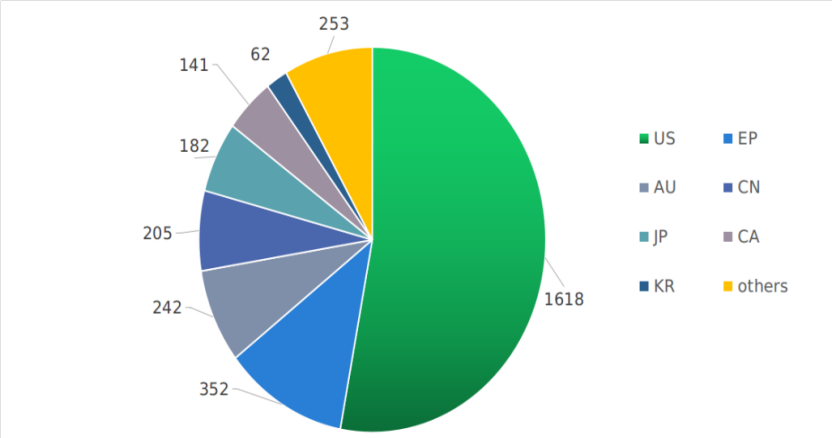 Considering patents in the field, majority of filings have been done in US followed by Europe, Australia, China, Japan whereas other countries like Canada, South Korea, India, Russia are also in the game. Majority of filings are owned by walker digital with >400 applications followed by Baxter and IGT with over 100 applications. Significant number of applications have been filed by Oraya, Priceline, Samsung, Medtronics, Ethicon and Applied spectral Imaging Ltd as shown below. 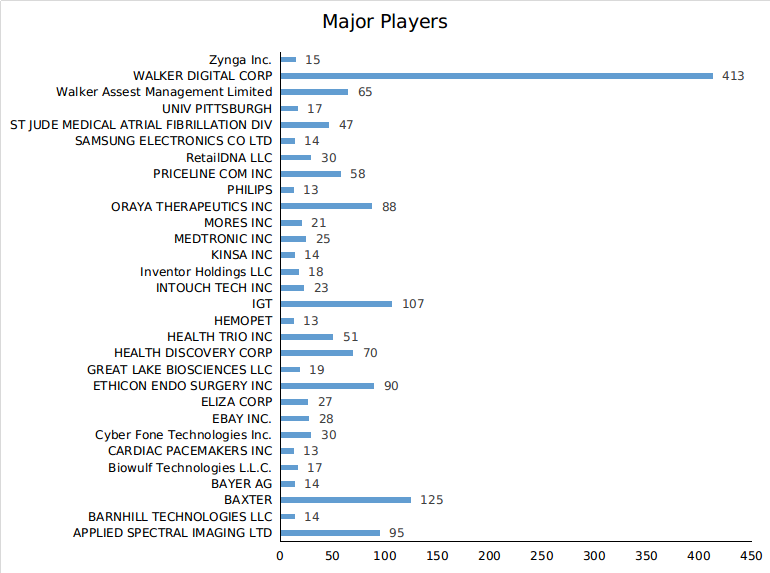 Awareness: People around the world need to be aware of these technologies. Ones with low educational and technical exposure should be provided acquaintance and training on these platforms.

Installation and Set-ups: System setups and making people familiar with the same is again a challenge in a few areas. However, these telemedicine platforms are now available on most approachable mobile phones which makes it more suitable to a large population.

Security concerns: There are significant concerns related to the security and privacy of the data shared on the telemedicine platforms. Even with most advanced and technically sound apps and devices, sometimes there could be serious glitches or malfunctions which could lead to increasing threat to system security. These issues need to be closely monitored.

Legal and Compliance Issue: There are many rules and regulations for practicing the telemedicine services by doctors and physicians. License concerns, compliance issue, prescription regulations, insurance coverage etc are again current challenges with the telemedicine platforms.

There have been a few fraud stories associated with telemedicine companies in recent times. A case investigated by the FBI and the U.S. Department of Health and Human Services Office of the Inspector General (HHS-OIG), where a Telemedicine company owner was fined with $424M for Medicare Fraud Scheme. Read more..

Tele-medicine is a growing area of technology which indeed is very fruitful to cut down the gap between patients and doctors. Merging new disciplines with telemedicine revolutionize the technology by providing aid both to doctors (AI/ML integrations) and patients (Telemedicine kit, multi-language, group calls and many more). For a country like India, where nearly 70% of the population is living in rural areas with very low level of health facilities which include less number of medical excellence; limited specialists; well equipped hospitals etc, telemedicine could revolutionize health care. With all the research going on worldwide, tele-medicine is giving hope that more and more people (rural or urban) around the world will get access to the best health care facilities with much more ease and accuracies.