Mergers and Acquisitions are the strategical approaches that are being adopted by companies, with an ultimate aim to grow and expand. Companies put in a lot of effort and time to make a deal happen. But, given the chaos created by coronavirus crisis, global mergers and acquisitions have plummeted, and lately, have become stagnant.

The dealmakers began this year by kickstarting a multitude of deals and with a positive outlook expecting increased synergistic activity. But “that is now starting to change” says Cornelia Andersson, head of M&A and Capital Raising for Refinitiv.

As per Refinitiv’s data, it was the worst first quarter for M&A since 2016, showing the overall number of deals declined 13% from a year ago and hit a six-year low.

Talking about jurisdiction, M&A activity has taken a toll in each case, as can be seen in the following graph. 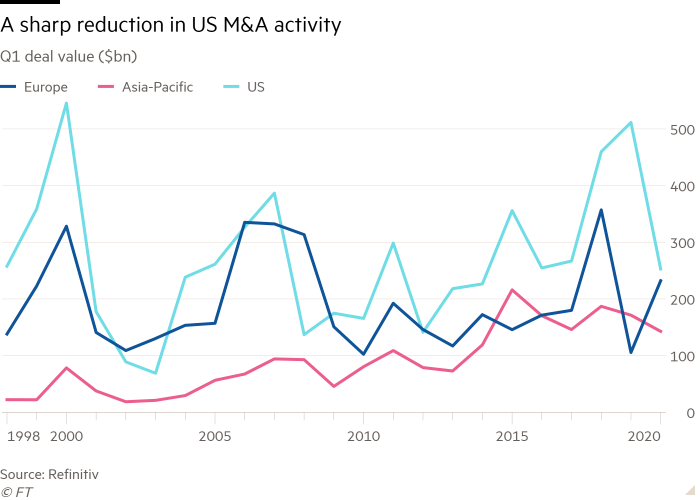 Insights: The decline in the case of US & APAC is apparent, but the unusual skew in the case of Europe is just because of a handful of mega-deals settled just weeks before the virus started battering the continent’s economies.

What are the reasons for this plunge and delay in M&A activity?

Fear About The Economic Projection

How can M&A opportunities be created out of this pandemic?

According to one analysis done during the 2001-02 recession, acquisitions completed during and right after the recession generated almost triple the excess returns of acquisitions made otherwise. In short, recessions offer rare opportunities for companies to improve their competitive position through acquisitions, mergers, and partnerships. So, instead of just watching & waiting for this pandemic to get over, dealmakers should utilize this time in the best way so as to find out the most resilient opportunities that might be waiting on the other side of the pandemic.

As per Ros L’Esperance, global co-head of banking at UBS, “M&A activity has slowed down as clients are trying to assess where the market is moving, the impact on individual sectors and businesses, and are waiting for valuations to stabilize, but dialogues remain robust,”. He added, “Certainly there will be delay inactivity but once things reset they will probably bounce back and accelerate much faster than it did after the financial crisis in certain sectors.”

These M&A can be made in the same domain or cross-domain. Not to mention, such deals require proper strategy behind them. Let’s have a look upon the opportunities, which can be grabbed in the form of mergers & acquisitions:

For example, in a report by McKinsey and fashion-trade publication Business of Fashion, it has been estimated that 34% of publicly traded fashion companies in Europe and North America were showing signs of financial distress before the pandemic, that could possibly go above 80% because of store closure for two or three months.

According to Citigroup Inc.’s head of EMEA M&A, Alison Harding-Jones, who also is the vice-chairman of banking, capital markets, and advisory, “Transactions are driven by strategic need will come first,”; “we expect intra-industry consolidation as well as vertical integration to secure and support supply chains.”

As discussed above, once this pandemic is over, it is expected that M&A activity would regain the surge. Therefore, it is a crucial time for companies to strategize their moves to scrutinize & grab the perfect opportunity fit for their business. But, above all aforementioned factors, it is suggested one should not rush and should not use deals to reshape the company’s competitive foundation, but instead, to strengthen it.